Our local electricians were voted as Best of Nashville for four years in a row. Our electricians and HVAC contractors understand you have a choice when you are looking to find a local near service company near you who can respond quickly. Our electricians and heating and cooling techs believe in doing things the right way the first time. We know that many customers read online Yelp and other reviews before hiring and we hope you will read our reviews for both HVAC and electrical work. Reading reviews is an effective way to get to know the relationships a company has with its customers and how it responds to issues that arise.

West Side Electric Service works hard to earn your trust every day and are honored to have received the Best Electrician Award in the most recent Nashville Scene Reader’s Poll and Best Heating and Cooling in The Tennessean’s Toast of Music City Awards.

We encourage you to read our online reviews on local sites such as Google, Yahoo, Superpages.com, Angie’s List, Bing, Yelp, and YellowPages.com. 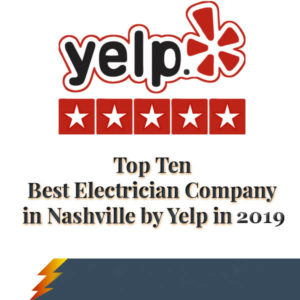 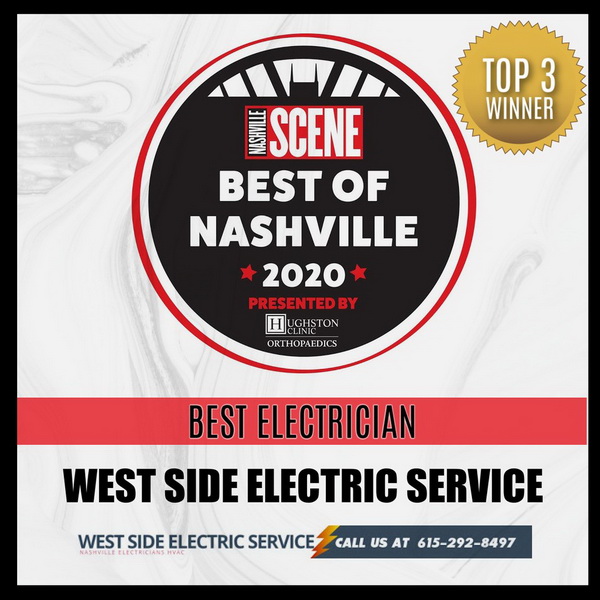 5 STARS Angi
“West Side Electric Service / Jerry Bone were great at every level. It was Saturday morning 2/20/21 first warm day in a week 34 degrees. NES responded quickly and determined issues with meter box. They do not repair meter box. NES disconnected my service and said “call an electrician”. I called West Side Electric Service. It was Saturday morning Jerry answered the phone and had his men there in less than 2 hours. The repair was timely, professional and the price was fair. Very pleased. Will recommend and use again. THANKS”

Description of work
My outside meter box lugs/connectors were fried. Power to my house was reduced.

5 STARS Angi
“They came out quickly and resolved the problem. Showed up on time and I appreciated they were willing to do a small job without having to wait days.”

5 STARS Angi
“I got some ridiculously high estimates from other electricians, and then someone told me about West Side. They came, looked it over, and just fixed it. And charged less than $100.00. No fuss, no muss, no waiting. A bargain, and it is doing fine. It was not a temporary fix, it is doing great still.”

Description of work
Reattached the main electric line to the house where a falling tree had pulled it loose.

5 STARS Angi
“Technicians were able to do the work the same day I called. They were friendly and efficient, kind of folksy and clearly knew their business. Their prices were very reasonable based on my previous experiences with electricians. I would definitely use them again.”

5 STARS Yelp
“We just bought a house in the Nations adjacent to Sylvan Park and decided we wanted a chandelier hung in the dining room. The builder’s electrician was booked out, and we have a party that the fiancé wanted to have the light fixture hung before, so it was my task to research and find somebody to do the job quickly.
At this point West Side Electric became an important part of the story. After a quick Google search to find local electricians, and their Yelp page explaining their expertise, I called these guys to receive a quote on removing 2 can lights and installing a chandelier.
I initially called on a Tuesday and they were able to get somebody out here by Thursday. The guys showed up, gave me a cost, which I thought was very reasonable, and I thanked them. I figured I’d have to schedule an installation for a later date, but I was wrong. They were prepped and ready to go that day! Woody and Shane did a great job, and after a couple of hours the job was complete and our light was installed.
Icing on the cake? They were able to patch the holes left from the can lights making my only remaining task be a little sanding and painting!
We couldn’t be happier with the service, quickness, and pricing we received from West Side. For any other electrical needs, these guys will be my go to, and if you live in West Nashville or anywhere in the area, I’d recommend them to you too, if you asked me.”

5 STARS Yelp
“I just had the best experience with Jerry and West Side Electric. My meter block was melted, along with some wires, and my landlord spent 8+ hours trying to figure out the issue. By time they got NES out to unlock the meter, my landlord’s electrician couldn’t do an after hours call because he didn’t have the part. Within an hour, Jerry was at my door. The price for the repair + after hours service seemed fair and he explained everything to me. He even spoke with my landlord, which I think calmed him down about not using “his” electrician. Whether you have electrical, Heat/AC or water heater issues, call Jerry at West Side Electric!”

5 STARS Google
“We called Westside Electric after the power went out for a portion of our house (we have an older home). Jerry was able to come by on a Friday evening and identify + fix the problem as well as help us with additional issues. He was very knowledgeable, competent, and worked quickly to get everything done.”

“Our furnace motor went out on a super cold day and, while West Side Electric did not have the part in stock, the owner, Jerry Bone, went out of his way to help us find the part locally. I will call West Side Electric the next time something goes wrong, and also recommend them to family and friends. It was a super experience.”

“We have several family members living in our home and our circuit breaker blows regularly, well at least it did until we called this company. We were in desperate search to find experienced local Nashville electricians. We would be in the middle of vacuuming or blowing our hair dry and have to go into the garage to reset the breaker, wasting time all the time. Then 5 minutes later, the electricity would go out again. West Side assessed the situation and installed a breaker panel that could handle our volume. Everything works now and we are not in danger of starting a fire either. Prices were fair; service was excellent.”
Nashville, TN Customer

“This electric company is the one I phoned when all the lights went out recently and I was in the dark. I guess we blew a fuse or overloaded a breaker and damaged it to the point that the box required an upgrade. I have to admit, our family tends to run several appliances at the same time, including hair dryers running and flattening irons. They replaced the panel box and all works fine now. We were very treated fairly and they handled it in an expedited manner.”
Bellevue, TN Customer

“We recently called this company when our air conditioning was not cooling our house properly. We had used these electricians before, but not for HVAC work. The owner came out and looked at both of our units. He ended up detecting a tiny leak and was able to add Freon this time. He didn’t try to upsell. He did give options like possibly adding an attic fan to help with the summer heat of our upstairs bonus room. I had an A+ experience with them again.”
Hermitage, TN Customer

“These guys are pretty amazing. I’ve used them for several jobs and more than anything, I’m impressed with their work ethic. If you want to know that the job is being done right, give them a call. You won’t regret it.”
Alex H, Nashville TN 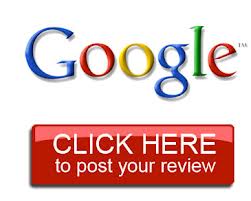 * Feel free to post a review on Yelp, Google, or Yellowpages online